As usual with our heads down in client work it’s been hard to find the time to write our week notes, but hopefully these notes will catch you up. I was on holiday for the first of the three weeks, so apologies in advance if I miss anything that happened that week.

We’ve continued our engagement at FutureLearn. Ben & Chris R have been valiantly battling on with the change related to the Strong Customer Authentication rules which come into force in September. To that end, they were very pleased to get their work merged and deployed earlier this week.

On Thursday, Ben had the opportunity to present the work at an internal FutureLearn Show & Tell event where his talk was well received. In particular, the Technical Architect on their team recommended that people look at the commit history to show how their careful incremental refactoring approach successfully achieved a substantial improvement in an important area of the codebase without undue risk.

Chris L & I have continued to be embedded within one of the product teams on working on some top secret new functionality. Since FutureLearn secured investment back in April, they’ve been growing their overall product development capability. Our product team, which was formed by budding off an existing team, has increasingly been finding its feet as an independent entity. I like to think we’ve helped the lovely people on our team with this process!

Anyway, we must all be doing something right, because we’ve recently agreed to continue our engagement with FutureLearn until October. We won’t all be involved for the whole period, because (if everything goes to plan) a couple of us will start work with another client in September. Discussions to finalise this prospective work are ongoing, but we hope to firm things up next week.

I’ve sometimes felt quite isolated with only Chris L & I working on-site at FutureLearn, so it’s been really good to meet up with Ben & Chris R for lunch in Camden on the days they’ve been on-site. Also I’ve started regularly working at GFRHQ in Southwark on Fridays - it really helps that FutureLearn are very well setup for remote working.

Back in June we heard that our application to GCloud 11 had been successful and on Tuesday last week the framework went live. So if you work in government and you need help designing and developing a service, then please get in touch. You can find out more on our GCloud supplier page.

On Monday this week we heard that we didn’t get the Innovate UK funding we applied for as part of a collaboration with Filmfixer. Although this was obviously disappointing, especially given all the work that Chris L and Andrew of Filmfixer had put in, the feedback from the assessors was all pretty positive and I think we’ve learnt a lot from the application process. It sounds as if the project was perhaps regarded as being slightly too niche and/or slightly too commercial for this competition.

Later on Monday, Ben powered through the application for the next version of the Digital Outcomes & Specialists framework which we’ve been on since the first version which launched in 2016. So now that we’re on both GCloud and DO&S I think we’ve got government procurement pretty much covered!

Last Wednesday, we had a GFR away-day, all excellently organised by Chris R. We had hoped to do these once a quarter, but it feels as if we’ve struggled to do even two per year, so kudos to Chris for making it happen this time!

We started the day in a meeting room at the TOG Gridiron building where we first built a Post-it note timeline of the past year at GFR. Chris then facilitated a session where we used the timeline as the context for a retrospective to generate a list of things we might want to talk about in more detail. The two topics that we decided to focus on were “profitability” and “purpose”.

The discussion about GFR’s purpose was quite wide-ranging. Amongst other things we talked about the types of clients that we do and don’t want to work for and that we want to have a positive and meaningful impact on the world. We then decamped to the Somers Town Coffee House and continued the discussion over lunch. I think this kind of discussion is crucial to make sure we all understand each other’s motivation.

After lunch we were locked up in the JM’s Office, an escape room at HintHunt:

A crime scene investigation where a private detective (JM) has found a dead body in his office and he has been wrongly accused of murder. The police have sealed off the office and you have managed to gain access to the crime scene.

You only have one hour to find the evidence and clues to wind up with case, prove JM’s innocence and find your way out of the locked room!

I’m pleased to report that we escaped with plenty of time to spare and it was a lot of fun, if a bit hot and humid! 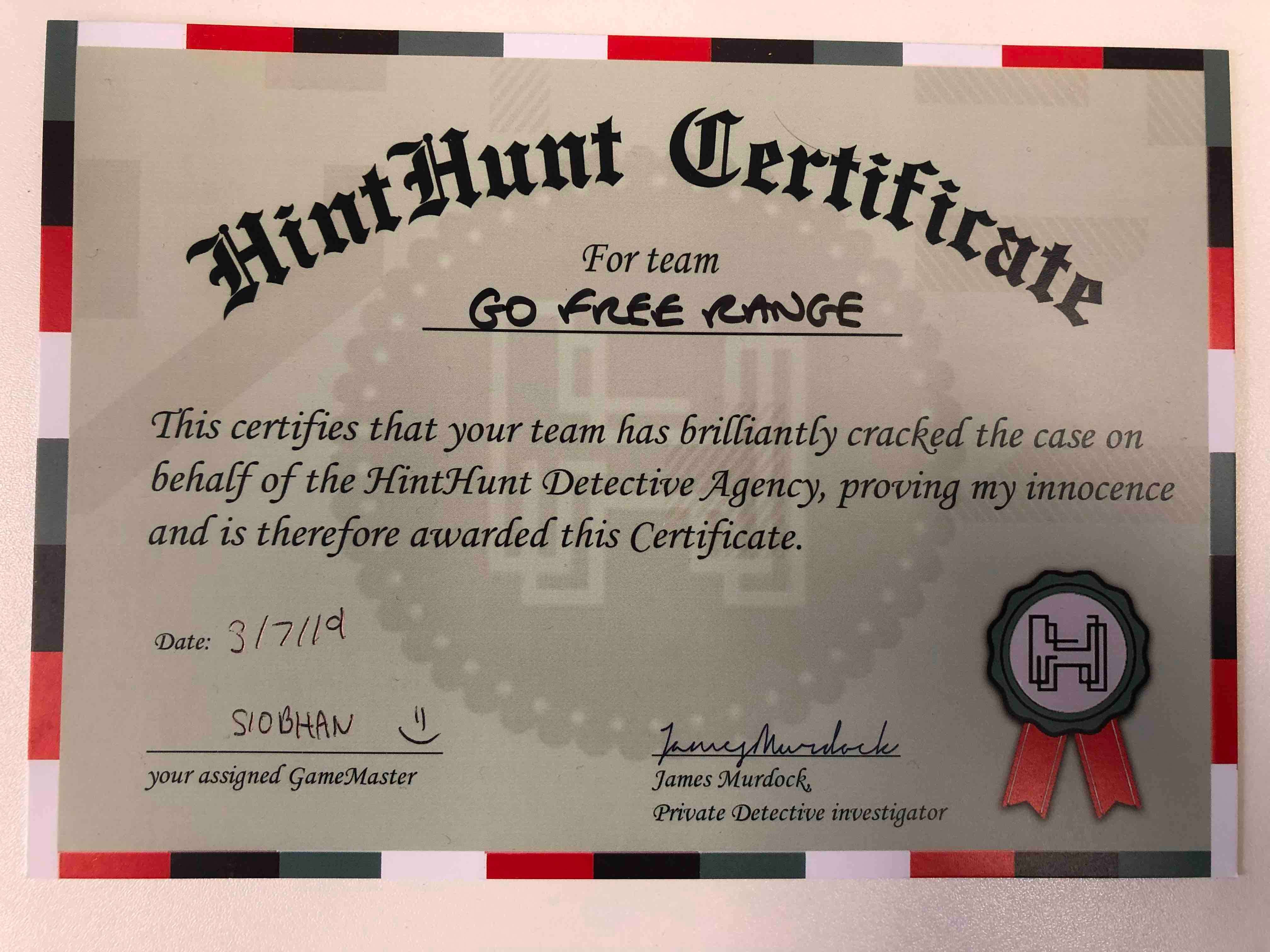 Over the last week or so we’ve seen a noticeable uptick in Mission Patch sales which is great. We recently switched the focus of our advertising spend from Google to Twitter, but we’re not sure if there’s any correlation. One particularly encouraging aspect is the number of repeat customers - hopefully this means we’re doing something right!

Being so busy with client work, it’s been hard to find any time to push development of Mission Patch forward, but the uptick in orders has motivated a few relatively minor improvements.

Some time ago, I tried to create an Instagram account for Mission Patch, but ran into a problem where for some unknown reason the account was disabled almost immediately after being created. I initiated the process to reactivate the account, but ran into problems with emails to Instagram support bouncing.

We use an Amazon WorkMail account for our Mission Patch email and, after some enquiries on their forums, I followed a recommendation to set a custom MAIL FROM domain to improve the chances of emails being delivered successfully. It’s not obvious that this made any difference, but when I next managed to contact Instagram support they told me the account had been disabled in error and they were happy to reactivate it.

Continuing on the profitability theme, Ben recently built a spreadsheet to analyse the income and costs from Mission Patch. Hopefully soon we can find the time to drill into this analysis a bit to see where we can make improvements.

Away from work, the two Chrises have been hard at work on a few practical projects. A week ago Chris L took a blacksmithing course where he forged a viking knife - very cool!

More recently he took a couple of days off to start work on building a couple of wooden chairs. If the quantity of wood shavings is anything to go by, these chairs are going to be very impressive! 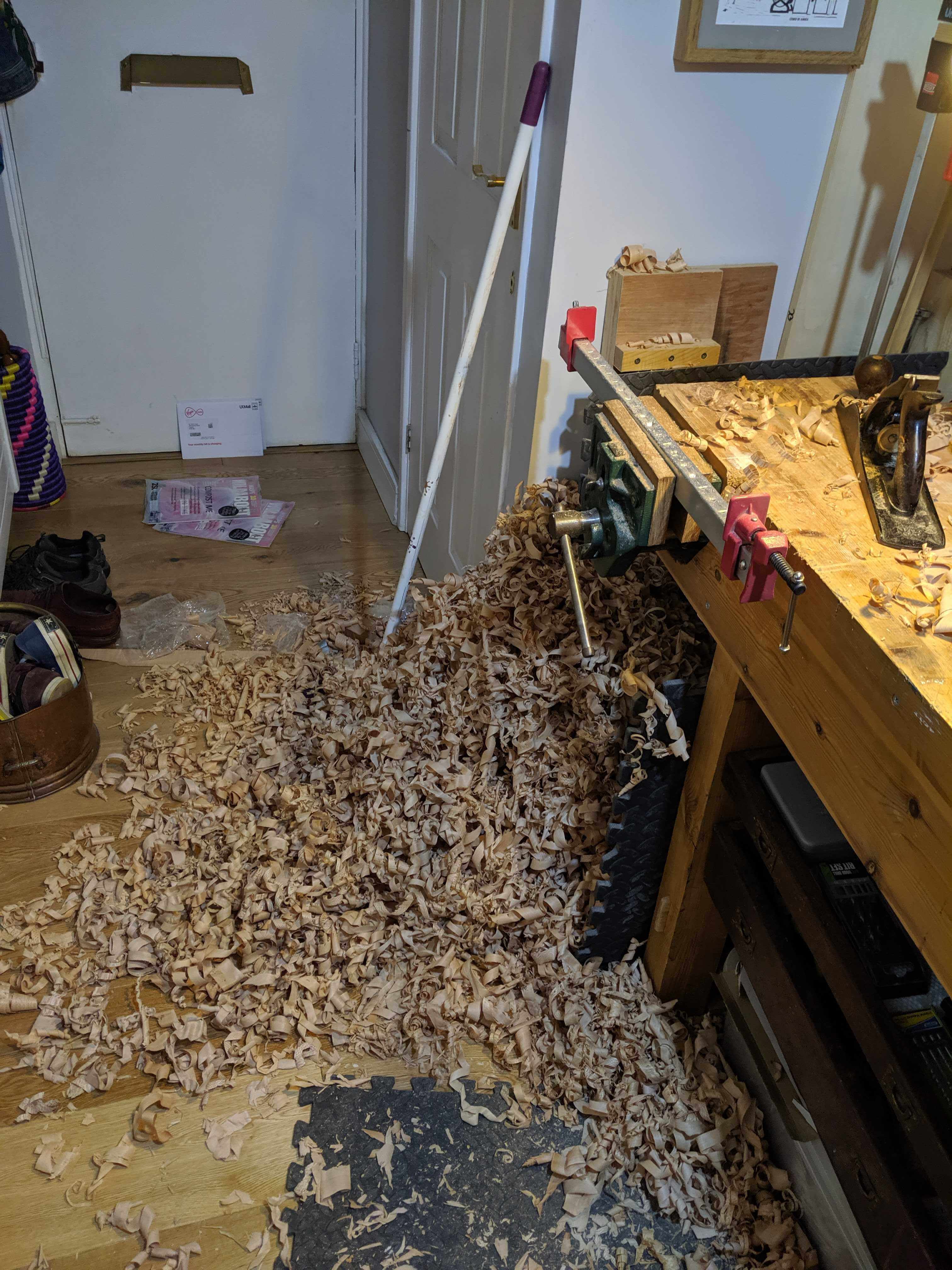 Chris R has been digging out a slipway on his riverside plot and recently discovered a set of hidden steps.

Anyway, that’s all for now. I hope you’re having a lovely summer!