The big news of week 266 is that we’ve decided to keep our office until the end of the lease, which expires in January 2015. Woohoo! We spent a long time looking at the figures and finally satisfied ourselves that we could make it work. It’s a big space (nearly 1000 sq. ft.) for just two of us but we’re hoping to do some things that mean we have more people making use of the office.

We’d like to publicly thank Mark O’Neill and the team at Stirling Ackroyd for their work in trying to find someone to take the lease from us. Mark’s a great chap (we first dealt with him Stirling Ackroyd helped us find this office) and we’d definitely use Mark and Stirling Ackroyd again.

We made the decision to keep the office on Tuesday, and it felt like a great relief having been talking it through for a few days. Unfortunately, the sense of relief was short lived as when we let our landlord know about our decision, he unexpectedly offered us the chance of surrendering the lease. We hadn’t even considered this as a possibility (when we’d asked the landlord about this in the past he explained that it’d cost us the majority of the remainder of the lease) so it definitely caused us to re-evaluate our decision. We talked it through some more, slept on it and made the decision to keep the lease on Wednesday morning. Yay!

We had a relatively busy office in week 266. James A was over from the States, and joined us in the office for a couple of days. Tom S, Tom W and Paul B also made appearances. As I’ve already mentioned, it’s quite a big space so it’s always nice to have a few more people around to fill it.

James and I welcomed Matteo Giaccone to the office for a coffee on Thursday morning. Matteo’s in London looking for employment but previously co-founded a co-operative, weLaika, in Turin. It was great to chat to Matteo about some of his experiences of building a co-operative up to about twelve people. It certainly sounds as though weLaika and GFR have faced some similar growing pains in the past, so it was great to be able to share our stories. Matteo mentioned that he’d want a single person that had ultimate responsibility for decision making if he were to do something similar in future. This is definitely something we’ve discussed in the past: We found it hard enough to come to consensus with four of us, so I can only imagine how much harder it must be when there are twelve people.

Tom W and James A have been actively investigating Docker for a while now. They both spent some time explaining it to James M and I while in the office. While I conceptually understand how it works, I’m still not sure about the exact problem it’s trying to solve, i.e. what would I be doing that would be improved if I was to use Docker.

While not discussing the office or generally chatting, we both managed to do a little more work on our pet projects. James spent some time on his method_log tool which is coming along nicely. The tool allows you to search for a method in a Ruby project and see how that method has moved/changed over time. Method log utilises git versioning and a knowledge of Ruby syntax and semantics to trace the history of a specific method. There’s still more that James wants to do but you can try it out right now by installing the Gem. You can see an example of method_log being used to inspect one of its own methods in the screenshot below. 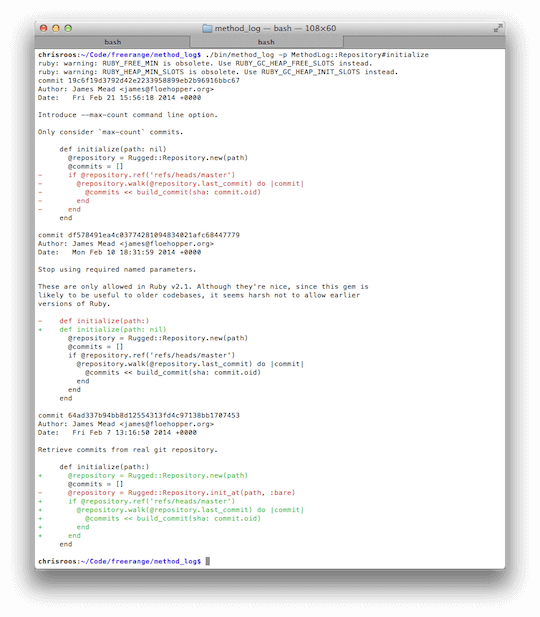 I chose to spend some time on my Thames time lapse project. Unfortunately, I didn’t make quite the progress I was hoping to. I think the weight of nearly 230,000 existing images, and lots of ideas made it hard to know where to start. I’m hoping to chat through what I have with James to see if I can work out what the next most important thing is.

Anyways, I think that’ll do us for week 266. Until next time, everybody peeps.