It’s been the first week in a long time where we’ve all been around. With many ongoing projects (such as mocha, recap, roosmarks and printer) it can be hard to know what to work on. So for the next month or so we’ve decided to focus on a single thing each week to work on together.

This week, our chosen project has been Sauron, our all seeing eye. It sounds a simple enough project to get started. Get a number of email accounts, import all their email into one big database, then display those emails. In practise though, the world of email is not as straightforward as it seems. Just as we found with hashblue, whenever you think things are working, string encodings are just around the corner waiting to jab you in the eye. We spent a fair amount of time ensuring Sauron can import badly encoded headers, bodies with missing charsets and Latvian spam. We’ve also worked to hide duplicate messages and introduce search. We’re close now to something that’s useable.

Although we’ve been concentrating on Sauron, it’s not the only thing we’ve worked on. In particular we’ve had a lot of interest about printer, with several people requesting one. To meet this demand, a small production line was set up in our office. For most of the week, the smell of solder wafted through the air. 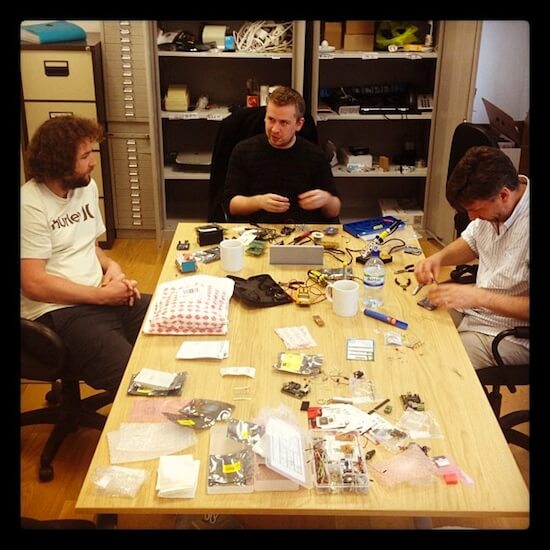 Last week I went to Railsberry in Krakow. There was lots I really enjoyed about the conference, including:

The other thing I took from Railsberry was how much thought and effort had been put into it. While Ruby Manor has always seemed to distill a conference into its purest form (no frills, just excellent talks), Railsberry was almost the opposite. There were free t-shirts, bags, and hoodies you could buy. The venue was thoughtfully decorated, all in keeping with the general pink unicorn and berry branding. An excellent mobile app kept attendees updated, and the food provided was delicious (particularly for fans of dumplings). What came through most was the passion and enthusiasm of all the people in Applicake, not just for their conference but for Krakow and Poland as a whole. They wanted people to be happy and it showed.

I have a lot of sympathy for the Ruby Manor approach, but Railsberry has made me think there’s room for both types of conference.

Anyway, that’s it for another week. These weeknotes were brought to you by the colours Red, Yellow and Green, the song “A Hard Rain’s Gonna Fall” and Forbrydelsen.